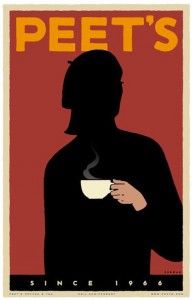 In 1966, Alfred Peet opened his first coffee shop at the corner of Vine & Walnut in Berkeley, Calif. It’s still there, 46 years later. A lovely store with dark wood, a distinctly neighborhood feel, and an unpretentious atmosphere, the original Peet’s Coffee has arguably had the single most important impact in coffee drinking in the US in the last 50 years, and possibly around the world.

Why? Because it inspired Jerry Baldwin, Zev Siegl, and Gordon Bowker (all friends of Alfred Peet) to open a small coffee shop of their own up in Seattle. You may have heard of it.

Founded in 1971, Starbucks is “the largest coffeehouse company in the world,” says Wikipedia. Though it’s grown much faster than Peet’s, Starbucks was modeled on that original café in Berkeley, especially its style of dark-roasted drip coffee. Currently there are more than 17,000 Starbucks stores around the world, according to the company’s website. So although it’s true that people have been drinking coffee for 500 years, I think it’s fair to say that the way we think about coffee today is how Starbucks taught us to think about it.

But that may start to change. Nearly 50 years after Peet’s, a new breed of artisan coffee roasters is rebelling against the dominant, dark-roasted style of Peet’s and Starbucks. They’re selling a lighter roast of coffee, to emphasize a lighter, cleaner, “fruity” character of the bean, which they feel is lost when coffee is darkly roasted.

That freshness is what these roasters are after. A barista at Four Barrel once described it to me this way:

Four Barrel may be on the forefront of this trend, but there are a number of other coffee houses doing much the same thing. In Sacramento, where I live, one of the better local roasters is Temple Coffee, which produces a beautiful, more gently roasted cup of coffee. In Bay Area, there’s Blue Bottle and Ritual Roasters, among others. In Portland, there’s Stumptown Coffee Roasters. Across the US there a number of others, including Intelligentsia Coffee in Chicago and Handsome Coffee in LA.

As you might guess, this trend hasn’t gone unnoticed by the big players like Starbucks. As The Wall Street Journal reported, Starbucks has responded to this trend – and the changing taste of American coffee drinkers – with a new “Blonde Roast.” Recently Peet’s also started selling two new “medium” roast coffees in its 200 stores. 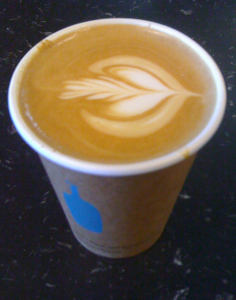 There’s a lot more to be said about these new coffee spots and the hot coffee culture that is at the edge of cool, and I will follow up this blog with a future post. I’m especially intrigued by how a lighter roast of coffee with more pronounced acidity is becoming popular at the same time that lower alcohol, less ripe, and higher acid wines are gaining popularity. Coincidence? More about that soon.

In the meantime, I have a question to you: If you’ve tasted these lighter roasts of coffee, what do you think?

Me, I’m a big fan of Temple, Blue Bottle, and Four Barrel. But I will confess that I also like Starbucks’ Blonde Roast. Nor does this mean that I don’t love Peet’s. I do, I promise. I’ve been a loyal Peet’s customer since I discovered them in college. But I also like the fresh approach of these new coffee artisans. What about you?

2 Replies to “After 50 Years, a Small Revolution in Coffee”